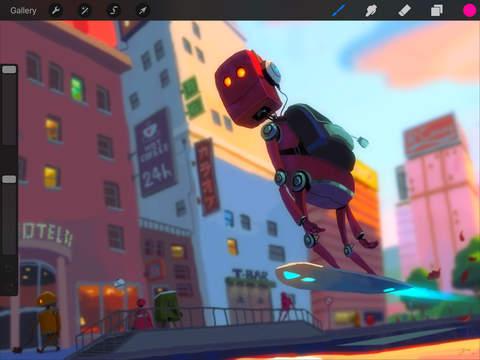 Savage Interactive today updated its sketching app Procreate with iPad Pro and Apple Pencil support. The design app can now support 16K resolution canvases when used on Apple's upcoming 12-inch tablet, and the app will also take advantage of all the advanced features found in the Apple Pencil when the stylus is released sometime this month. The official release notes for version 3.0 of the app lists "predictive touch, coalesced touches, pressure sensitivity" as some of the new features available for the Apple Pencil.

Apple announced its first iPad stylus called "Pencil" alongside the iPad Pro on September 9, 2015 at the Bill Graham Civic Auditorium in San Francisco, CA. The Apple Pencil is a sleek, minimalist drawing tool with "pressure sensitivity," which means it can detect force for drawing thin or thick lines. It also includes a hidden Lightning connector for charging, and it can be used at the same time as your finger for creating smudge effects.

The Apple Pencil is sold separately for $99.