The iPad has been a real lifesaver for fans of strategic war games in a time when console gaming is all about massive online fist-person shooters. Almost a week never goes by without a new strategic-level war game or turn-based board game being released for Apple's tablet, and one can only assume that the games are only going to get better as the iPad improves. In the last few weeks premium titles such as Battle Academy 2: Eastern Front and Russian Front have been released to the App Store. While these games may be a bit too pricey for casual fans, any die hard turn-based game lover will have no problem shelling $10 to $20 for a decent release. Hopefully developers such as 2K Games take note and start developing better mobile versions of popular titles such as Civilization in the future. 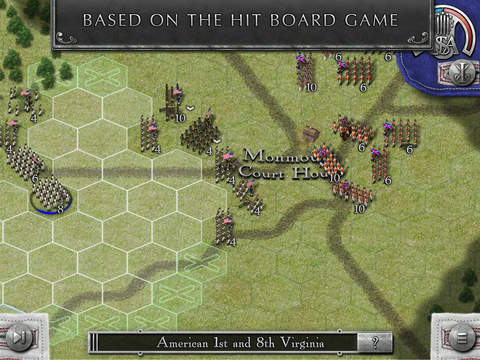 The latest strategy game for the iPad comes from Hunted Cow Studios, who is known for its browser and mobile games like Civil War: 1864. The studios latest release, Rebels and Redcoats, is based on the 1995 hex-based board game from Decision Games. Rebels and Redcoats allows players to recreate four famous battles in the American War of Independence and command up to 24 different combat units. The game is available now for $9.99 on the App Store.