Sometimes deleting your entire browser history is just not an option. Luckily You can delete individual websites from your browsing history on your iPad or iPhone by following these steps:

If you do not want your iPad to keep a record of your browsing history you can use the private feature found in most mobile web browsers. Here's how:

Safari - Apple's browser offers a Private browsing mode which allows you to surf the web without keeping track of the pages you visit, your search history or your AutoFill information. Just open the Safari app and tap the last icon at the bottom of your display, then tap Private. Remember, this will not hide the web pages from your ISP or stop websites from tracking you.

The Block Pop-ups option is ON by default, but if you accidently turned it off or need to allow pop-ups for a specific website you can enable them by navigating to Settings > Safari. Scroll down until you see the "Block Pop-ups" slider and tap it so it is OFF / WHITE.

In iOS 9 Safari keeps track of your frequently visited sites. These sites are displayed alongside your Favorites when you open a new tab. You can disable this feature by following these instructions:

1. Open your Settings app.
2. Tap on the Safari panel.
3. Tap the "Frequently Visited Sites" slider so it is OFF / WHITE.

Now the Frequently Visited section will not be shown when you open a new tab.

To delete an individual frequently visited site just tap and hold the site thumbnail until the Delete option appears.

You can open a new tab when using Mobile Safari by touching and holding the link you want to open. This will open a drop down box with the options: 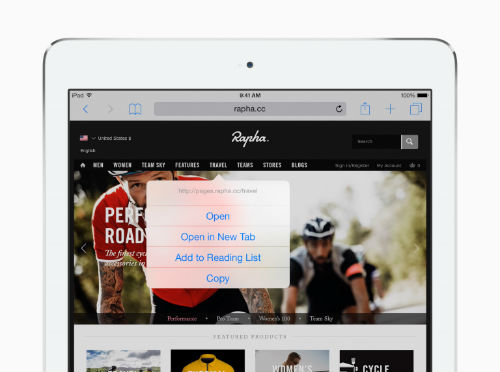 Tapping the "Open New Tab" option will open the link in a new tab and allow you to stay on the page you are currently using.

You can request to see the desktop version of any website on your iPad by tapping the address field and pulling down the screen. This will open the "Add to Favorites" and "Request Desktop Site" options. 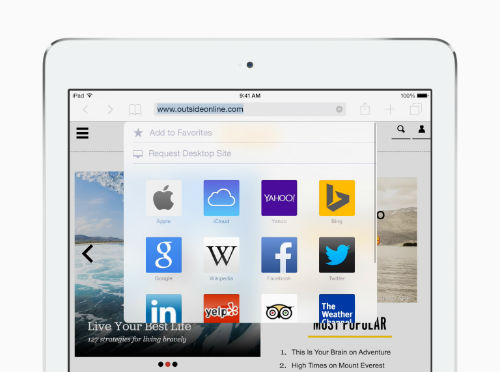 One of the major features that Apple included in iOS 8 is the ability for app-to-app communication, which is done through something called "extensions." Extensions make for a more fluid workflow by letting you access third party app features through native iOS apps. For example, you could add the "Litely" photo editing app's extension to Photos, which would let you access its editing tools directly from your iPad's Photos app, rather than opening Litely and editing from there. Alternate keyboards are another example of extensions. There are plenty of apps that are extendable to Safari as well; we'll use Pocket for this example, which is a handy app that lets you save articles, videos, etc. for later viewing. Here's how you add an extension to Safari:

1. Open your Safari browser and tap the Share/Action button, which is the box with an up arrow in the top right of your screen. 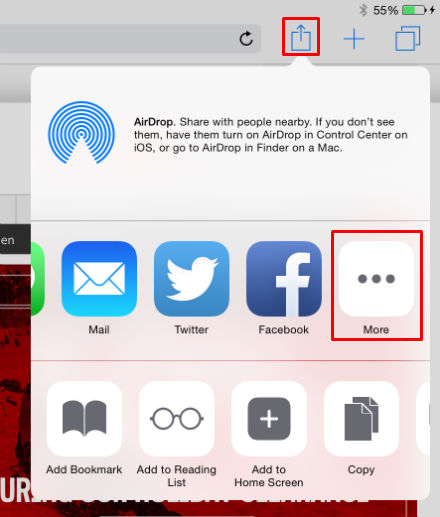 2. On the first level of options (the sharing options), scroll to the right until you get to the "More" icon. Tap it. (Note: Some extensions will be found under the "More" menu in the second row of icons, the "action" options. Pocket happens to be a sharing extension.)

A "Safari shortcut" is a link that appears on your Home screen. When you tap a shortcut it launches Safari and takes you directly to the website for that shortcut. Adding a shortcut to your favorite website from your iPad's Home screen is easy. Here's how:

1. Open Safari
2. Visit the website you want to add to your Home screen
3. Tap the share button (arrow pointing up on iOS 7 or later) at the top of your screen
4. Tap the "Add to Home Screen" option from the pop up box
5. Enter a title for your shortcut and tap "Add"