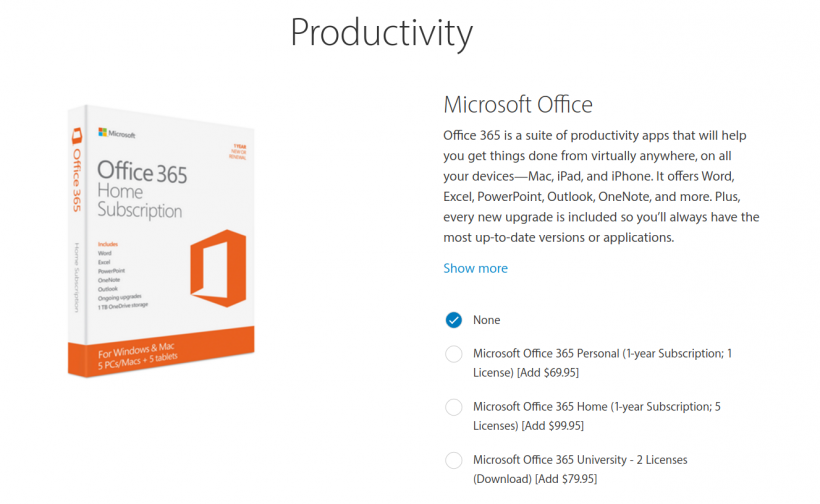 During Apple's Monday iPhone SE keynote, senior vice president of worldwide marketing Phil Schiller said one of the reasons Apple launched a 9.7-inch iPad Pro is to attract Windows users. Schiller said, " the majority of people that come to an iPad Pro are coming from a Windows PC, a desktop or a notebook." This is why it is no surprise that Apple is suggesting Microsoft Office to customers who are looking to pre-order the new iPad Pro model.

Only Apple's iPhone Plus models (iPhone 6 Plus, iPhone 6s Plus) ship with optical image stabilization. The 9.7-inch iPad Pro does however feature the best camera out of all the current iPad models, and it is equipped with all of Apple's other recent camera technology. The iPad Pro features a 12MP iSight camera with Live Photos support, autofocus with Focus Pixels and the ability to record 4K HD video. It also capable of snapping 63-megapixel Panorama photos, and includes a new front-facing Retina Flash on its 5MP FaceTime HD camera for better low light performance.

The 9.7-inch iPad Pro has the best camera out of all the current iPad models available on the market. It includes all of Apple's most recent camera technologies, except optical image stimulation (OIS). The iPad Pro is equipped with a 12MP iSight camera with a ƒ/2.2 aperture, autofocus with Focus Pixels and face detection. It features Live Photos support, and it is capable of recording 4K HD video and taking 63MP Panorama pictures. The front-facing FaceTime HD camera is 5MP with 720p HD video recording and Retina flash for better low light performance.

No, none of Apple's current iOS products are waterproof. There have been rumors that Apple's 2016 next-generation devices may be the company's first fully waterproof products, but none of the devices announced on March 21st, 2016, including the iPhone SE, are waterproof. There's still hope that the upcoming iPhone 7 will feature an IP rating for water resistance.

It is time for iPad Air owners to decide if they want to upgrade to the new iPad Pro now that Apple has officially unveiled the 9.7-inch tablet. This decision may be easier this year than past years since there has been a significant amount of time between the iPad launches. The iPad Air 2 was released on October 22, 2014 and the 9.7-inch iPad Pro was announced on Monday, March 21, 2016.

The 9.7-inch iPad Pro is equipped with a 9.7-inch (diagonal) LED-backlit Multi-Touch Retina display with 2048-by-1536 resolution at (264 ppi). It also includes wide color and True Tone display, fingerprint-resistant oleophobic coating and an antireflective coating.

The 9.7-inch iPad Pro is a lot like its bigger brother the 12.9-inch iPad Pro. Both are equipped with a four-speaker audio system. The 9.7-inch model also includes built-in sensors which automatically adjusts and optimize the audio, and iOS 9.3 adds the ability to play Dolby Digital Plus audio streams.

The 9.7-inch iPad Pro was introduced alongside the iPhone SE on Monday, March 21st at Apple's Infinite Loop campus in Cupertino, California. Pre-orders for the new tablet opened on Thursday, March 24th. It went officially on sale at Apple.com, and in Apple’s retail stores, through select carriers and Apple Authorized Resellers on Thursday, March 31 in Australia, Canada, China (Wi-Fi models only), France, Germany, Hong Kong, Japan, New Zealand, Puerto Rico, Singapore, the UK, US Virgin Islands and the US.