AT&T has officially announced they will be selling the new iPad through all sales channels on March 16. People who did not pre-order the iPad 3 in time, or do not wish to camp outside their local Apple store can try AT&T retail shops on Friday. Remember, if you're planning on buying a 4G model, AT&T is not offering free hotspot support like Verizon. 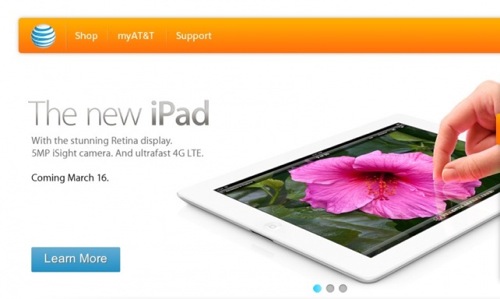 The new iPad 4G models have the ability to utilize high-speed LTE networks and share the connection with up to 5 other devices. This makes Verizon's superior LTE network and free personal hotspot support the better deal.

According to an advertisement sent to 9to5Mac Apple stores will be opening at 8am on Friday, March 16th for the launch of the third generation iPad. My local Apple store says they will be opening normal hours (10am), but told me to keep checking the Apple website in case anything changes. 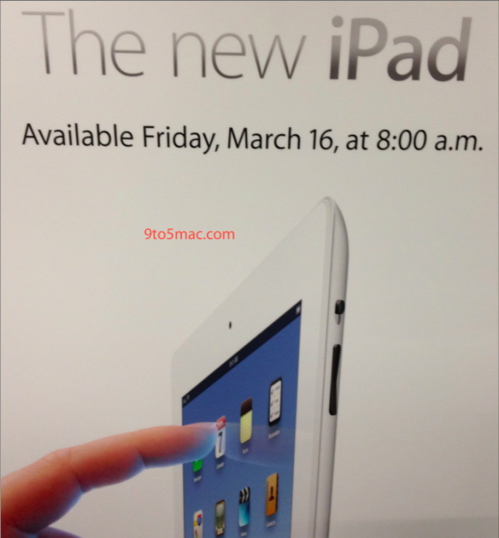 Demand for the new iPad has pushed online delivery estimates to "two - three weeks." This means if you want an iPad 3 on March 16th you will have to wait in line at your local Apple store. The 9to5Mac tipster said Apple employees will be pulling an overnighter in anticipation of the big event.

Apple told USA Today that "customer response to the new iPad has been "off the charts," and the rapidly changing shipping dates proves it.

The original March 16th pre-orders sold out within two days of the new iPad announcement on March 7th. This weekend ship dates slipped to an estimated "two to three weeks" in the United States, and most European Stores have been sold out of original pre-orders for a few days now. Apple said "customers can continue to order online and receive an estimated delivery date" for their iPad 3. 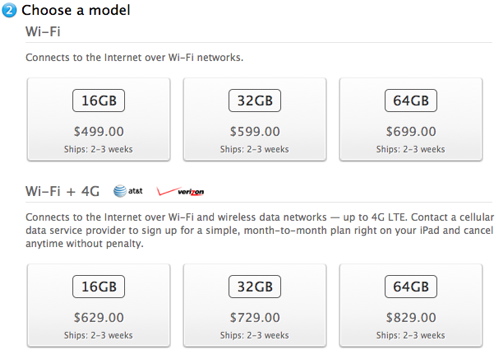 If you waited to pre-order your iPad 3 you will have to wait a few extra days for it to ship. All iPads ordered after March 9th will be shipped on the 19th, not the 16th. Even if you don't mind the longer wait you should still order the new iPad quickly. Apple had problems keeping up with the demand for the iPad 2 last year and took several months to catch up with orders. It's safe to assume that the new iPad's shipping date will get delayed even longer after this weekend. 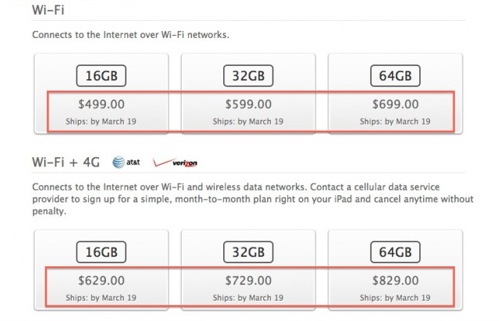 Apple has changed iPad shipping dates again to account for unexpected demand and a shortage of iPad Wi-Fi + 3G models across the US. Apple retail stores are having trouble keeping the units in stock, and international customers who pre-order their iPads from now on can expect the device to ship on June 7. Orders that made it in earlier will still arrive on May 28.

iPad shipping for US orders has been increased on Apple's online store to 7-10 business days, where before it was 5-7 business days. Apple sold 300,000 iPads on the first day of launch, and international demand is said to be overwhelming. Some users outside the US have already received iPads from friends or on the grey market.

iPad fans who haven't yet landed a device will have some revised wait times until their unit ships. The good news is that if your order for a 3G model was in last week, Apple has officially confirmed your iPad will arrive on April 30.

Those ordering a Wi-Fi only model can expect to wait 5-7 business days until their magical tablet hits the doorstep. As inventory supplies change and Apple gears up to launch the iPad pre-order internationally on May 10, the company is shifting dates accordingly.

Apple's online store has been updated to show that iPad pre-orders placed from now on will not be shipped on April 3rd. The new shipping date is April 12th for Wi-Fi only models, and remains late April for Wi-Fi + 3G iPads. 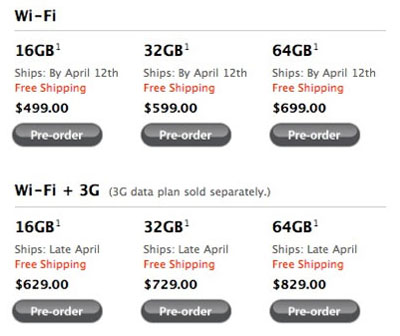 The company has not announced sales figures, although several estimates have put the number anywhere between 250 and 500 thousand units. iPads that are pre-ordered from now on will not be available for in-store pickup, suggesting that Apple has sold out of its first batch of devices.

Many customers who pre-ordered an iPad for delivery on launch day are now seeing updates to their iPad order status. WiFi only iPad models, in many cases, have had their status updated to 'Prepared for Shipment' (see screen shot below). Knowing their brand new iPad is boxed up and ready to go, simply awaiting dispatch, will certainly make already impatient iPad buyers even more itchy for next Saturday's shipment to arrive.

Although it may not come as a surprise given earlier reports of expected delays with the shipment of Apple's iPad accessories, customers who also purchased iPad accessories at the time their iPad pre-order was completed have yet to see their accessories updated to prepared for shipment status.

It is important to note that not all iPad pre-orders have been updated to the new status. Apple is obviously

UPDATE (03/12/10): Although the iPad is now available for pre-order, many readers are still unclear on some of the details found below. If you're vague on any of the details regarding pre-ordering, we suggest reviewing the Q&A below.

The long-awaited opportunity to pre-order the Apple iPad starts tomorrow. Although Apple announced over a week ago that iPad pre-ordering would begin on March 12th, 2010, Apple has been otherwise vague in the details they've volunteered. For those of you that plan to pre-order tomorrow, those details are likely very important.

What Apple did tell everyone in their press release was when the iPad would be available for pre-order on the 12th, and that both versions of the iPad (WiFi only and WiFi+3G) would be available for pre-order at that time. Following are answers to some of the most frequently asked questions regarding pre-ordering of the Apple iPad which Apple's press release, and other iPad information, failed to make clear.

What time on March 12th does pre-ordering begin?

Apple Media/PR Team has confirmed that iPad pre-ordering will be available as of 5:30 AM PDT (8:30 AM EDT).

Will my pre-ordered iPad arrive or ship on April 3rd?

Finally all the speculation and rumors about delays, release dates, and pre-order scenarios can be put to rest. Today, Apple announced release date information for the WiFi only iPad models as well as pre-order dates for both the WiFi and WiFi + 3G iPad models. Though the iPad is hitting shelves a week or so later than anticipated, the announcement puts to rest concerns about major delays and supply shortages that originated from analyst rumors circulated earlier this week. 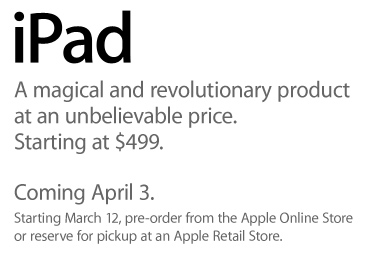 The WiFi only iPad models will be available to customers on