1. Open your Settings app on your iPad
2. Tap the General tab
3. Tap the About tab
4. Scroll down until you see "Version". This will tell you what version of iOS your device is running.

Now that the new iPad has been put through its paces, there have been reports that iOS 5.1 is not accurately reporting battery charge percentage. ZDNet has even said the battery algorithm is "busted" while other reports have warned against overcharging the device. For those who are worried about damaging their batteries, rest assured that the iPad is not destroying its own battery.

First of all, every iOS device will report a 100% charge while leaving room to spare. This keeps the lithium-ion batteries optimized. The iPad 3 battery is massive, clocking 42.5-watt-hours compared to the iPad 2's battery at just 25-watt-hours. As a result, iOS may be reporting the new iPad battery as fully charged when in fact it's only at 90% capacity.

Along with iOS 5 Apple has added OTA (over-the-air) operating system updates. This means smaller, targeted updates can be downloaded directly to the iPad instead of dealing with large IPSW files on iTunes. Only the parts of iOS that need to be improved are downloaded and replaced.

To update the iPad OTA, iOS 5.0 or later must already be installed. The iPad battery must be at least 50 percent charged or the tablet should be plugged in before starting the OTA update process.

Follow these steps to update the iPad operating system OTA:

1. Connect the iPad to a Wi-Fi network

iPad owners can look forward to the next Apple iOS firmware update, as iOS 5.0.1 beta has already been seeded to developers. The update should be available for the general public within a few short weeks and will provide bug fixes and new features to iPhone and iPad users alike.

When it comes to the original iPad, multi-finger gestures originally included in the iOS 4.3 beta update that were never deployed have finally made their way into the iOS 5.0.1 update. These gestures include 4 and 5 finger gestures that perform different functions including returning to the home screen without pressing the home button, app switching and multitasking dock access.

iTunes downloads iOS firmware files and stores them to a default directory on your computer automatically. These Apple firmware files have an .ipsw extension and are located in the following folders:

On Mac computers:
~/Library/iTunes/iPad Software Updates (where ~ is your home directory /Users/<Username>)

On Windows Vista and Windows 7:

We all know how Apple loves to stage special media events surrounding its products. Although this one sits squarely in the rumor department, MacNotes.de reports that Apple will show off features of the upcoming iOS 4.3 release next week, followed by a reveal of the next generation iPad. 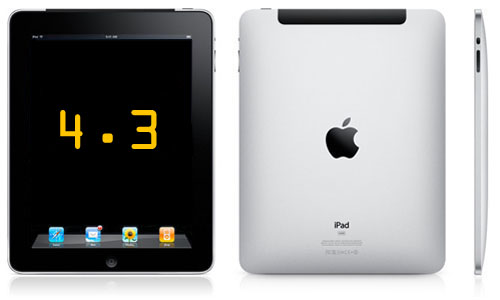 Of course, this is not outside the realm of possibility. In 2010 the original iPad was already old news by the time February came, and Apple is intent on releasing an update to its tablet to stave off the competition. January was completely overshadowed by another Apple product, the Verizon iPhone 4. 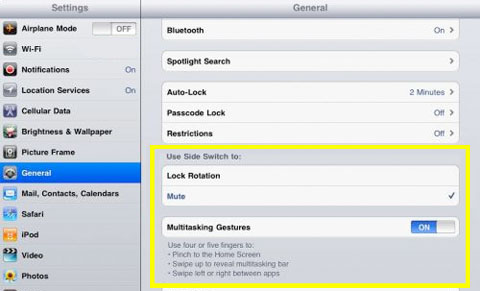 Apple released iOS 4.2 for the iPad on Monday November 22, 2010. On your computer, right-click the link below to download the official iPad firmware restore file.

Need to reset your iPad to factory settings, or restore a misbehaving iPad with a previous backup? Follow these instructions to restore:

1. Open iTunes on your computer.
2. Connect the iPad to your computer with the USB cable.
3. Your iPad should appear in iTunes in the left menu under DEVICES. Select the iPad.
4. Click the Summary tab in the main window of iTunes.

Most iPad owners are looking forward to using iOS 4.2 thanks to folders, multitasking, and other new features. Now there may be an even more important reason to update your firmware. Apple has revealed that updating your iPad from iOS 3.2.2 to the latest 4.2.1 patches no less than eighty (80) security vulnerabilities.

40 of these fixes have already been deployed on iPhones running iOS 4.1, with the other 40 implemented in 4.2.1. This leaves iPads with 3.2.2 firmware in the dust, with a long list of known Common Vulnerabilities and Exposures (CVE) as detailed in this Apple support document. As a matter of policy, Apple remains quiet about security holes until they are fixed to help prevent iPads and iPhones from being compromised by malicious code.