Wikipad's gaming controller for mobile devices has had an interesting history and it hasn't even been released. The Gamevice was originally announced back in 2014 as a portable controller for Windows 8 and Android tablets, but it was eventually switched to an iPad mini-only accessory before falling off the radar. But now according to Polygon, the Gamevice is back as both an iPad Air and iPad mini compatible device. 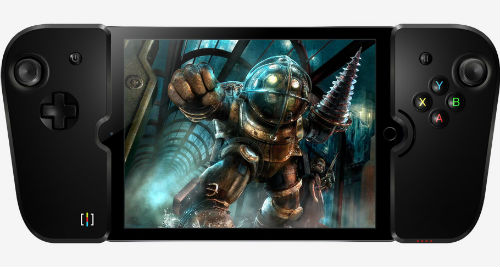 Not only is the Gamevice one of the few iPad-only controllers being released, but it snaps onto your iPad like most of the standard MFi iPhone controllers on the market. The Gamevice connects to your iPad via the Lightning connector and it features a classic dual analog sticks design with D-pad, four face buttons and so on. This is kind of an odd design for the iPad Air when you think about it. It would seem like most iPad gamers would prefer a Bluetooth controller rather than something that attaches to your already bulky 9-inch tablet, but Wikipad says their design will eliminate the need to prop up your iPad while you play games.

Wikipad has launched Gamevice.com for its new full spec MFi controller. The company originally announced that the portable controller would be available for Android and Windows 8 devices, but according to the website it only supports the iPad mini. This makes the Gamevice the first iPad mini-only controller released since Apple added MFi support in iOS 7.

The Gamevice features all the standard bells and whistles as other iOS controllers on the market. It is equipped with dual analog sticks, a D-pad, four action buttons and shoulder buttons. It comes in two separate pieces that cradle your iPad mini when attached.