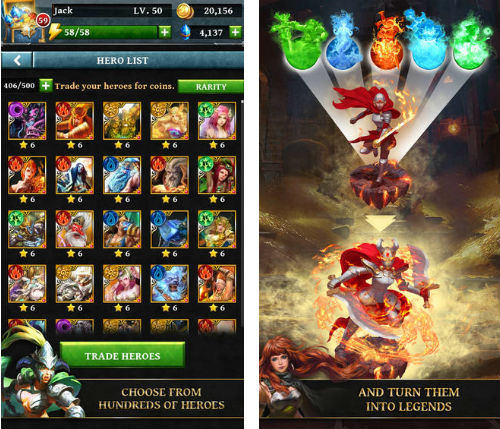 The game also features the ability to power up your characters so you can "evolve them into new legendary forms", 220 warriors for you to summon, and a multi-player option where you can team up with other players to defeat your enemies.

When I first heard the title of this game, I automatically thought it was an RPG.  As a real nerd, I got super excited about spending hours going on quests as a battle mage or something. I was wrong but not disappointed.

Brothers in Arms 2 is a First Person Shooter game set during World War II. The game was originally released for the iPhone and has been optimized and punched up for the iPad. You do battle in five different WW2 theaters: Pacific, North Africa, Sicily, Germany and Normandy. If you have ever played the Call of Duty series, BIA is more than just reminiscent of those.

World War II was a horrid event, but it sure does set the stage for some great battlefronts. You are compelled to kill different enemies; but mostly, it is a whole lot of Nazis. I found myself speaking in that weird accent Brad Pitt used in Inglorious Bastards. There aren't many bad guys you won't feel guilty pretending to kill, but the Nazis fit the bill.