Animation Throwdown for iOS is a huge disapointment 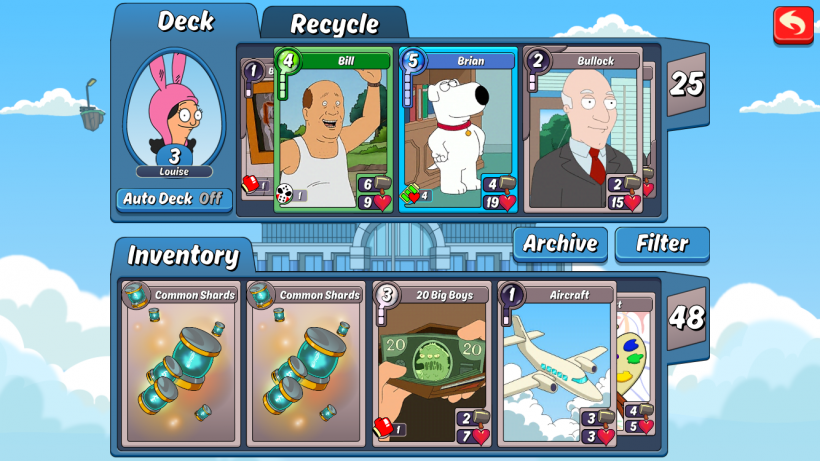 Kongregate's Animation Throwdown: The Quest for Cards had the potential to be the next Pocket Mortys, but instead we got another Family Guy: The Quest for Stuff. In which I mean another boring game that you can play with your eyes closed while you wait for timers to expire.

Animation Throwdown has all the pieces to be an epic game, but it doesn't know what to do them. Collectible card games are all about rare cards, combinations and strategy. While Animation Throwdown does offer a lot of fun cards to collect, it suffers from lackluster game play.

The biggest problem with the game is there is no strategy. Battles basically boil down to who has the best cards, and you can pretty much decipher if you won or lost by the third card played. There is no deck building strategy, and there is no epic combo you can pull to the turn the tables if you're losing. You just place cards and hope they are better than your opponents, or wait to die while there is nothing you can do to save yourself. Arena mode is also useless. I've never been matched with someone equal to me and have literally dozed off while grinding through weak opponent after opponent.

The game is also confusing. There's lots going on but you are never quite sure why. You earn XP but it doesn't look like you gain any skills or special abilities. There are guilds that don't seem to offer any advantage. You can replay the 25 chapters to unlock cards, but never seem to unlock them. The game seems to be all about grinding but not for much reward. Why do I have to fight Stewie 9 times? Why do I level up but then have to unlock a new character to increase my max health? How do I even unlock the new characters? I'm confused.

The only fun part of the game is doing research to unlock new combos, but this utilizes timers or premium currency, the two biggest mobile game buzzkills.

Fortunately there is hope for the game. Like I said Animation Domination has all the pieces to be a good game. Kongregate just needs to utilize them better by adding different cards for better combos, game play and deck building strategy. In most CCG every card is important, but in Animation Domination it just seems like whoever gets the most "epic" cards will win.

There's a lot of free collectible card games available on the App Store. Animation Throwdown: The Quest for Cards is going to have to do a lot better if it wants to compete.