Did Samsung really use Stanley Kubrick's 1968 film, 2001: A Space Odyssey, as a defense in their intellectual property battle with Apple?

According to Foss Patents, Samsung submitted a screen grab of the Kubrick film that depicts two astronauts using tablet computers while eating lunch. Samsung claims the photo proves that prior art for the general design of the iPad existed before Apple. 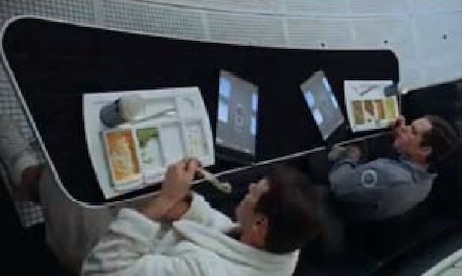 "Attached hereto as Exhibit D is a true and correct copy of a still image taken from Stanley Kubrick's 1968 film "2001: A Space Odyssey." In a clip from that film lasting about one minute, two astronauts are eating and at the same time using personal tablet computers. The clip can be downloaded online at http://www.youtube.com/watch?v=JQ8pQVDyaLo. As with the design claimed by the D’889 Patent, the tablet disclosed in the clip has an overall rectangular shape with a dominant display screen, narrow borders, a predominately flat front surface, a flat back surface (which is evident because the tablets are lying flat on the table's surface), and a thin form factor."

Foss writes that Samsung's Stanley Kubrick Defense probably won't fly with the court. I also like that they gave a YouTube link instead of suggesting the judge rent the film.

Apple is seeking injunctions in several countries against the Galaxy Tab. Apple has succeeded in temporarily blocking sales in Germany and Australia.