Thinner, faster, lighter has been the mantra spoken with each iPad hardware update. The successor to the iPad Air is no different, with analysts predicting an A8 processor and Touch ID in Apple's next full-size tablet. Now a parts leak purported to show the front bezel assembly of the iPad Air 2 looks to confirm an integrated LCD panel. 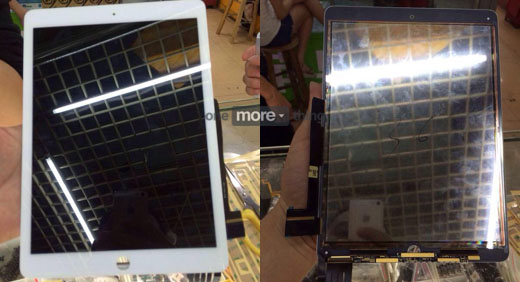 Apple currently uses this technology on the iPhone 5s, which fuses the front panel and display components into one part. Not only does this configuration shave off device thickness, but the integrated LCD can improve image display quality. Both the iPad Air and the iPad mini with Retina display have separate front panel and display components, making this a key area for improvement on the next generation iPad Air 2.

Even if Apple retains the current iPad Air form factor, gaining extra space inside of the outer shell means room for other components or a larger battery pack. Rumors to date point to the addition of a Touch ID sensor on the next round of iPad models, as well as improved camera resolution.

The iPad Air 2 will also sport the latest and greatest 64-bit mobile processor from Apple, the A8. In addition, supply chain leaks have pointed to the possibility of sapphire being used to help protect the large glass display from damage. The iPhone 5s camera lens is protected by sapphire, which can resist scratches better than glass.

Look for more parts leaks ahead of the iPad Air 2 announcement later this year. Reports have indicated the device could launch earlier than expected, sometime in the third quarter of 2014.