Apple has its sights set on three-dimensional gestures if a recent patent filing detailed by AppleInsider is any indication. The write up describes 3D additions to the commonly used swipe and pinch, including push, pull, twist and sculpt. Ultimately to work, a future iPad would require additional sensors to detect the proximity of user input to the display. 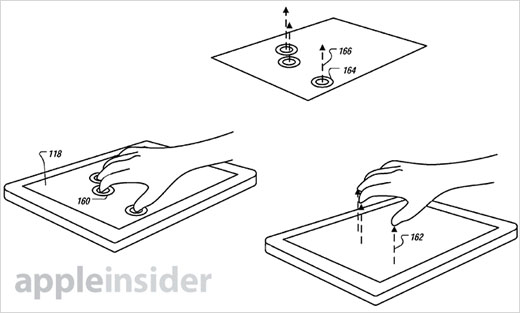 Lifting one's fingers off the screen would result in iOS or a compatible third-party app generating or manipulating a 3D object. Shapes or clay objects could be rendered on the display in real time, taking advantage of the iPad Retina display. Titled "Working with 3D Objects," the patent points to several potential uses that could make iOS devices more useful for a variety of applications.

Once can easily imagine iOS games with 3D inputs, relying on several planes of movement to control characters on the iPad display. Rumors of a larger iPad in development could mean 3D rendering software would get a boost in the tablet space, with a whole new way to control objects. Even iOS settings themselves could be altered using 3D gestures, providing more efficient and interesting ways to manipulate buttons and sliders.

Push and pull gestures could even be used to move between different layers in iOS. Apple has previously researched several complimentary concepts that could drastically change how users interact with the iPad in the near future. Many of these ideas have been reflected in patents awarded to the company.

Rumors of an iPad that would support 3D gestures are not new. Similar reports two years ago pointed to several patents including hand signals and virtual buttons and dials.