ESPN has rebranded its mobile app again, this time dropping SportsCenter from the name and adding iPad support for the first time. The SportsCenter app was retitled ESPN SportsCenter in 2013, but it is now just being called "ESPN." The update also adds optimization for the larger iPhone 6 models. 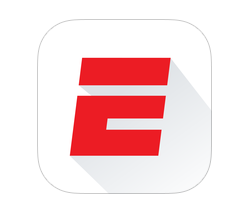 The new version of the app is basically the same as the previous version but now it takes advantage of the iPad's larger display. Users can still easily access the Scores and News categories plus ESPN NOW, which was added in version 4.0. The NOW section offers more breaking news than the News section which includes the day's top stories in a more classic long article format.

Version 4.2 of the app also adds a quick access button for a user's favorite teams in the lower right of their display. This allows users who are signed into their ESPN account to quickly gain access to information and news about their favorite MLB, NFL, NBA, NHL and college teams. The ESPN app also promises coverage of other sports such as Cricket and more.

The new ESPN app is available as an OTA update for existing users or as a free download on the App Store for new users. It supports all devices running iOS 8.0 or later.