As expected iPad sales continue to slump as larger smartphones and laptops put the squeeze on the tablet market. That's why the iPad may have been left out of Apple's press release announcing the company's Q1 2015 earnings. 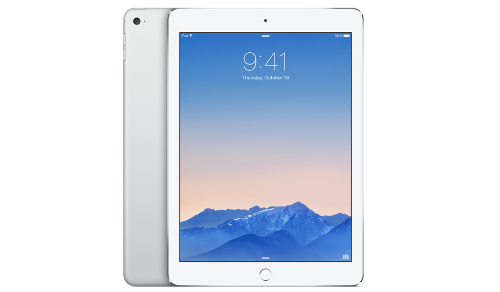 Apple attributed its $74.6 billion in revenue to "all-time record revenue from iPhone and Mac sales as well as record performance of the App Store," but failed to mention the iPad. The iPad wasn't a slouch in any sense, selling 21.4 million units, which was 18% less sold than the same period last year. Tim Cook did acknowledge on Tuesday during an investor conference call that the switch to larger iPhone displays may be eating up iPad sales.

"There’s probably some level of cannibalization that’s going on, with the Mac on one side and the phone on the other."

Cook did remain optimistic about the future of the iPad noting that first-time buyer rates and consumer satisfaction are very high.

"“I see that the first-time buyer rates are very high. By very high, I mean that if you look at some of the developed markets, like the US, Japan, the UK, you would find that 50 percent of the people are buying an iPad for the first time. If you look in China it’s over 70 percent. And so when you have that kind of first-time buyer rates, you don’t have a saturated market.”

He did however warn investors that he doesn't see any "miraculous" turn around for the iPad happening in the near future.

“Our revenue grew 30 percent over last year to $74.6 billion, and the execution by our teams to achieve these results was simply phenomenal.”

The results were fueled by all-time record revenue from iPhone® and Mac® sales as well as record performance of the App Store℠. iPhone unit sales of 74.5 million also set a new record.

“We’d like to thank our customers for an incredible quarter, which saw demand for Apple products soar to an all-time high,” said Tim Cook, Apple’s CEO. “Our revenue grew 30 percent over last year to $74.6 billion, and the execution by our teams to achieve these results was simply phenomenal.”

“Our exceptional results produced EPS growth of 48 percent over last year, and $33.7 billion in operating cash flow during the quarter, an all-time record,” said Luca Maestri, Apple’s CFO. “We spent over $8 billion on our capital return program, bringing total returns to investors to almost $103 billion, over $57 billion of which occurred in just the last 12 months.”

Apple is providing the following guidance for its fiscal 2015 second quarter:

• operating expenses between $5.4 billion and $5.5 billion

Apple’s board of directors has declared a cash dividend of $.47 per share of the Company’s common stock. The dividend is payable on February 12, 2015, to shareholders of record as of the close of business on February 9, 2015.

Apple will provide live streaming of its Q1 2015 financial results conference call beginning at 2:00 p.m. PST on January 27, 2015 at www.apple.com/quicktime/qtv/earningsq115. This webcast will also be available for replay for approximately two weeks thereafter.

This press release contains forward-looking statements including without limitation those about the Company’s estimated revenue, gross margin, operating expenses, other income/(expense), and tax rate. These statements involve risks and uncertainties, and actual results may differ. Risks and uncertainties include without limitation the effect of competitive and economic factors, and the Company’s reaction to those factors, on consumer and business buying decisions with respect to the Company’s products; continued competitive pressures in the marketplace; the ability of the Company to deliver to the marketplace and stimulate customer demand for new programs, products, and technological innovations on a timely basis; the effect that product introductions and transitions, changes in product pricing or mix, and/or increases in component costs could have on the Company’s gross margin; the inventory risk associated with the Company’s need to order or commit to order product components in advance of customer orders; the continued availability on acceptable terms, or at all, of certain components and services essential to the Company’s business currently obtained by the Company from sole or limited sources; the effect that the Company’s dependency on manufacturing and logistics services provided by third parties may have on the quality, quantity or cost of products manufactured or services rendered; risks associated with the Company’s international operations; the Company’s reliance on third-party intellectual property and digital content; the potential impact of a finding that the Company has infringed on the intellectual property rights of others; the Company’s dependency on the performance of distributors, carriers and other resellers of the Company’s products; the effect that product and service quality problems could have on the Company’s sales and operating profits; the continued service and availability of key executives and employees; war, terrorism, public health issues, natural disasters, and other circumstances that could disrupt supply, delivery, or demand of products; and unfavorable results of other legal proceedings. More information on potential factors that could affect the Company’s financial results is included from time to time in the “Risk Factors” and “Management’s Discussion and Analysis of Financial Condition and Results of Operations” sections of the Company’s public reports filed with the SEC, including the Company’s Form 10-K for the fiscal year ended September 27, 2014, and its Form 10-Q for the fiscal quarter ended December 27, 2014 to be filed with the SEC. The Company assumes no obligation to update any forward-looking statements or information, which speak as of their respective dates.

Apple designs Macs, the best personal computers in the world, along with OS X, iLife, iWork and professional software. Apple leads the digital music revolution with its iPods and iTunes online store. Apple has reinvented the mobile phone with its revolutionary iPhone and App Store, and is defining the future of mobile media and computing devices with iPad.

© 2015 Apple Inc. All rights reserved. Apple, the Apple logo, Mac, Mac OS, Macintosh, iPhone and App Store are trademarks of Apple. Other company and product names may be trademarks of their respective owners.